Kiev, Ukraine (CNN)Ukrainians rolled out the red carpet near the country’s parliament on Sunday for performers from 42 countries in an opening ceremony complete with all the theatrics one would except from the Eurovision Song Contest.

Around the same time, roughly 450 miles east, a more somber procession was taking place, as the bodies of three Ukrainian servicemen killed fighting Russian-backed forces in eastern Ukraine on May 1 were brought back to government-controlled territory. 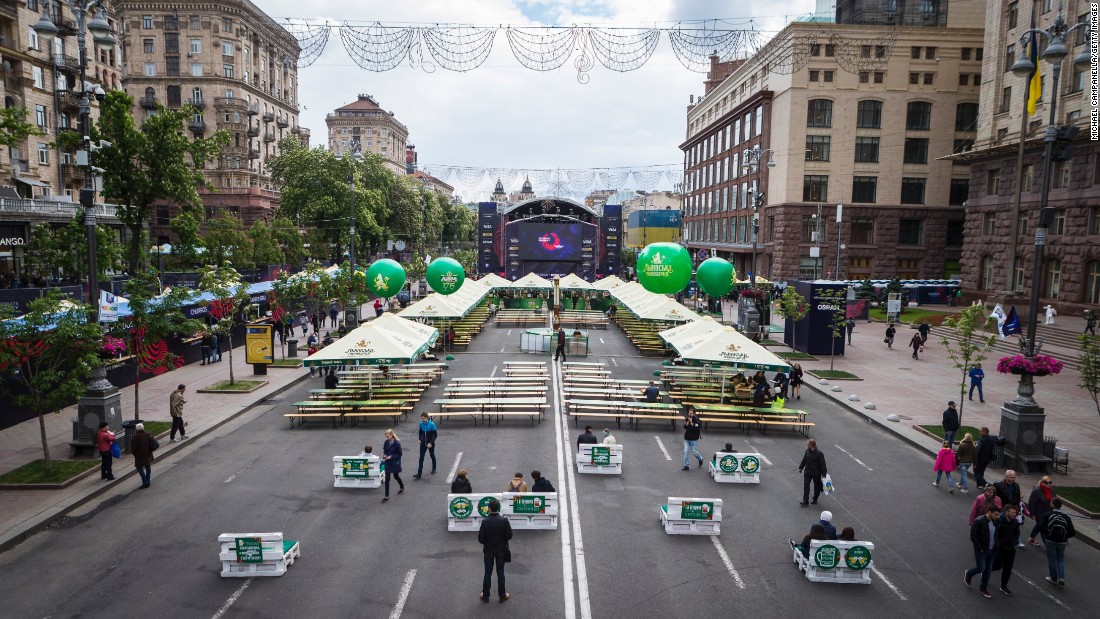 Some 10,000 people, including 2,673 Ukrainian servicemen — at least five since Eurovision preparations began last week — have been killed in the conflict, now in its fourth year, according to the military.
Read more: Family life amid the shelling in eastern Ukraine’s warzone
Nothing suggests that an end is in sight for the fighting, which has affected pretty much everyone in the country in some way. And some Ukrainians are upset that attention is being diverted from the battlefields to observe a week-long festival of camp.
“It’s absolute madness,” said Alina Anatolyevna, a uniformed member of the Donbas battalion. “People desecrating sacred ground and behaving like a war isn’t happening and people aren’t dying — this is not normal.” 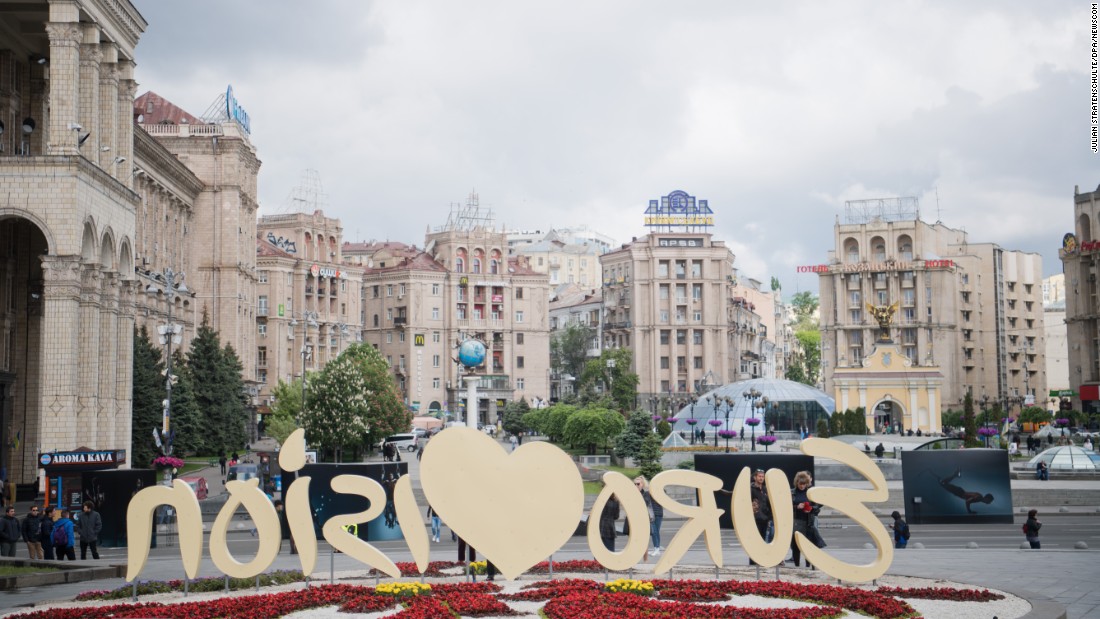 The sacred ground she was referring to is central Khreshchatyk Street and Independence Square. Today it’s the site of the Eurovision Village, where visitors lounge atop beanbags and puff hookah. Three years ago it was where more than 100 Ukrainians died in clashes with the security forces of the former Moscow-friendly president, Viktor Yanukovych. The uprising forced Yanukovych to flee and sparked Russia’s annexation of Crimea and the conflict in eastern Ukraine — and set off the worst confrontation between Russia and the West since the Cold War. 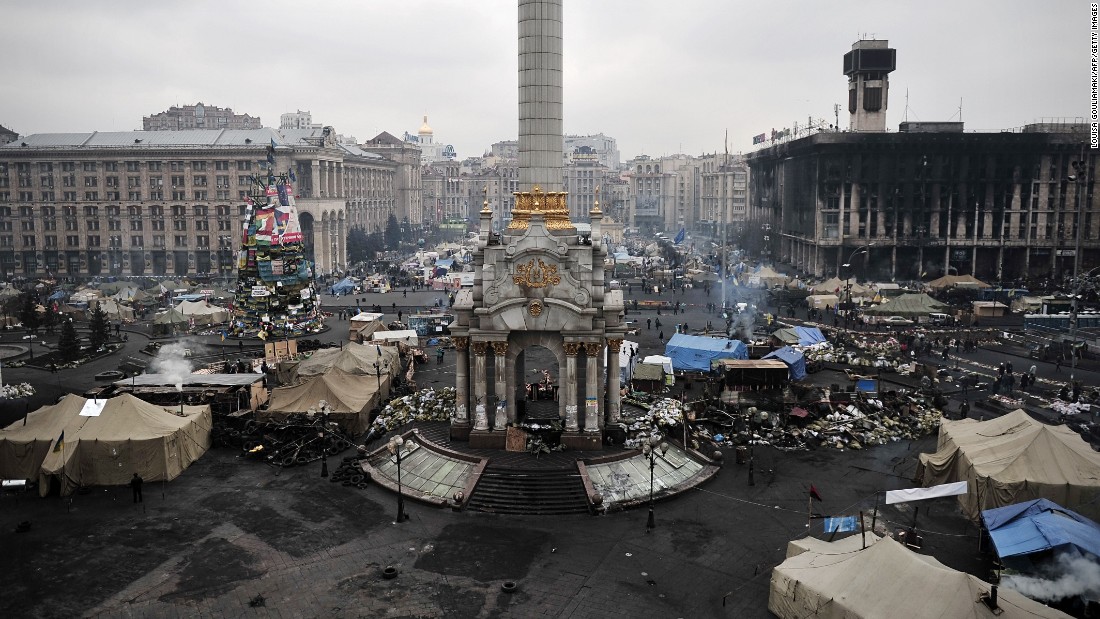 But it hasn’t been completely glossed over. Amid the Eurovision Village and fan zones — with their beer gardens and big screens, selfie stations and LED-lit stages erected to entertain the 20,000 foreign visitors expected to arrive for this week’s competition — stand billboard-sized photographs of wounded veteran Paralympians. And hundreds of uniformed Ukrainian servicemen help make up the 16,000-strong security force protecting the event.
It all strikes a jarring note in the otherwise celebratory atmosphere.
After Ukraine’s Eurovision victory in 2016 won it the right to host the event this year, there was talk about relocating it because of the country’s security situation. But Vilyen Pidgornyi, a Ukrainian defense ministry spokesman, told CNN that would have been a mistake. He sees Eurovision as “a demonstration of the West’s trust in Ukraine” and an opportunity to unveil a reformed country that has endured continental Europe’s deadliest conflict since the Balkan Wars in a bid to become “more European.”
“People may ask, ‘Why are we holding festivities when there are battles every day and people die?’ Yes, but isn’t this what the people die for?”.

Eurovision on the front line

War is not a foreign concept for Eurovision. In fact, the European Broadcasting Union founded the contest in the 1950s, in the aftermath of World War II, as Europe sought to rebuild itself through cultural exchange — something Ukrainian President Petro Poroshenko took pains to note in his address marking its official start.
And Eurovision, often a microcosm of politics in Europe, has itself become a front in the Russia-Ukraine conflict. 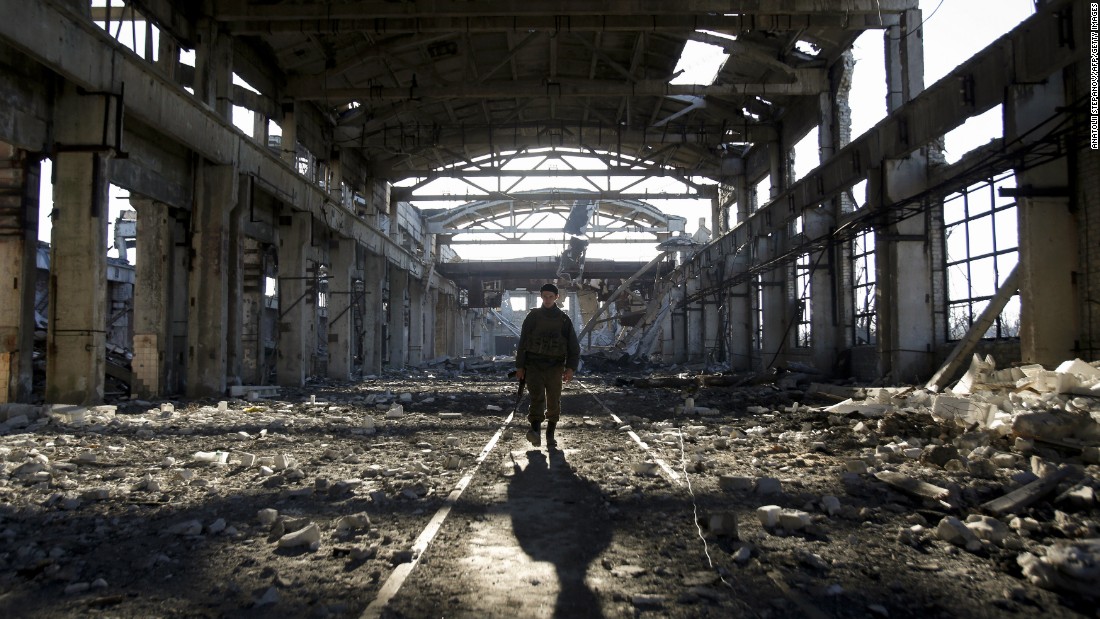 The first shot came from Ukraine, with its 2016 winning entry, “1944,” sung by Jamala, about Stalin’s deportation of Crimea’s Tatar population. It began: “When strangers are coming/They come to your house/They kill you all and say/We’re not guilty, not guilty.”
Russia, infuriated by what many observers saw to be parallels between Crimea in 1944 and the recent Russian annexation of the peninsula, protested the decision, saying the song was in violation of contest rules about songs being political in nature.
This year, Moscow fired back, choosing as its representative the wheelchair-bound Yulia Samoilova, likely knowing that her performance in annexed Crimea in 2015 would irk Kiev. Sure enough, shortly after she was selected, Ukraine’s security service announced she would not be allowed in the country — the first time a Eurovision host nation has taken such a step — citing her violation of Ukrainian border laws.
As a result, Russia’s main broadcaster, Channel One, pulled out of the contest, saying it would not broadcast the event this year.
Related: Russia says no, drops out of Eurovision
That’s fine with many Ukrainians, including Alina Kosse, whose cottage sits smack on the government side of the front line in war-ravaged Mariinka. Once a sleepy bedroom community, much of the town has been reduced to rubble by artillery fire from Russian-backed separatists. Not that she could watch the song contest anyway, as Ukraine’s far eastern regions receive only Russian television.
“Personally, Eurovision doesn’t matter when we’re under attack every day,” Kosse said. “Everything is empty and meaningless, as well as the war.”