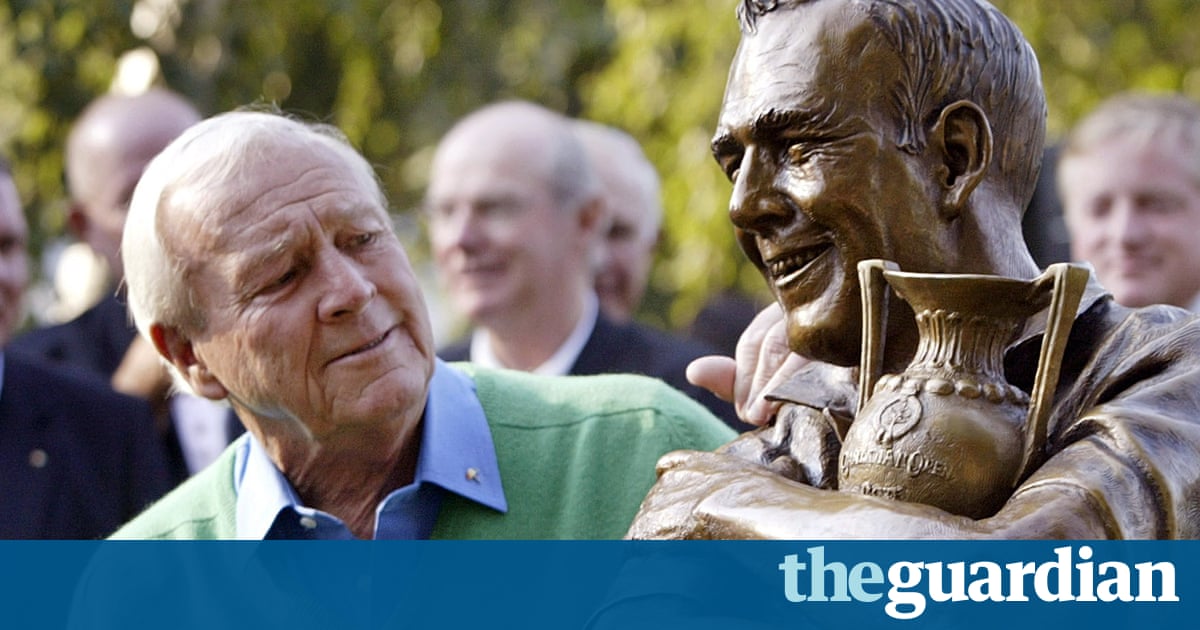 In any list of reasons for the present popularity and high financial standing of golf, the name, and the game, of Arnold Palmer are irresistibly linked.

Palmer, who has died aged 87, was one of the most charismatic golfers ever to play the game, a mans man who was adored by women and a player for whom no play was ever impossible. He got into, and out of, more trouble on the course than any of his championship winning peers, and so outrageous were some of his recovery shots that he quickly attracted a huge following.

The fans, the foot soldiers, who followed him through good or ill became known as Arnies Army and they never deserted him. Even though his golf inevitably declined with age, their fervour for him was undimmed, and even on the US Seniors tour he invariably departed the first tee with a bigger gallery than anyone else. Nor was his appeal confined to occasional fans. Jack Statter, golf correspondent for The Sun newspaper, was once watching his beloved Arnie when he noticed that the great mans caddie had failed to replace a huge divot. He nipped in quickly, trousered it, took it home and eventually grew a complete front lawn from that one small piece of turf. He called it, proudly, Palmers Piece.

Such devotion was inspired by the obvious passion that Palmer had for the game. He had a slashing, dashing style, frequently accompanied by a grin. He would hit the ball hard, the finish to his swing resembling a field athlete trying to break the world record for the hammer throw. It was not a swing that could be guaranteed to keep the ball out of the trees, nor did it. Jim Murray, the late and great Los Angeles sportswriter, and a big fan of Ben Hogan was one day watching Palmer when one of his drives finished in deep rough. According to Murray the ball was in a pile of twigs and leaves and I think there was a dead squirrel and a beer can in there too. Anyway, Palmer walked over and stared down at his ball. Then he saw me standing there and asked: OK wise guy, what would your idol Hogan do here? I told him: Hogan wouldnt be here. Palmer laughed and hit the ball onto the green anyway. Trouble, he once said, is bad to get into but fun to get out of. I suppose theres a place to play it safe but as far as Im concerned its not on the golf course.

Palmer was one of the few men to have given a word new meaning in golfs lexicon. In 1960 he won the US Masters at Augusta by finishing birdie, birdie, birdie. Almost all the sportswriters referred to Palmer charging through to the win, and he duly became famous for his final round finishes, the Palmer Charge.

Only two months after that Augusta win, he also won the US Open and again the charge was in evidence. After three rounds it looked as though he was without a chance, and before the final round he was discussing his prospects with a sportswriter friend, Bob Drum. What, wondered Palmer aloud, would a 65 do for me this afternoon? Drum, a big, burly and blunt man, was dismissive. Nothing, he said. Palmer, stung, went out and drove the first green at Cherry Hills, Denver, a hole measuring 346 yards. He got to the turn in 30, came back in 35 and won what was to be his only US Open. He won the Masters four times, in 1958, 1960, 1962 and 1964, and his seven majors were completed by winning the Open championship twice.

Palmer was rightly credited with reviving the almost moribund Open by playing in it for the first time at St Andrews in 1960. Few Americans thought it worth their while to come and play in the oldest of golfs major championships, but Palmer decided otherwise and encouraged many of his compatriots to make the trip as well. He was runner-up in 1960 and then won twice in succession, in 1961 and 1962, at Royal Birkdale and Troon respectively. The impact was immediate and immense. Prior to Palmer, only two Americans had won the Open since the end of the second world war: Sam Snead in 1946 and Hogan in 1953. In the years 1961-81 they won 14 times, by which time the Open had become the most cosmopolitan, and arguably the most influential, championship in the world.

Palmer was born in Latrobe, a small industrial town in western Pennsylvania, to Deacon, a golf professional at the Latrobe Country Club, and his wife, Doris. He began playing at Latrobe at the age of four, started caddying at 11, and was winning big local tournaments in his teens. He started studying at Wake Forest College (now University), but was badly affected by the death of his room-mate Bud Worsham in a car accident, and left college during his senior year to begin a three-year stint with the US Coast Guard, mainly in Cleveland, Ohio, where he felt he could rethink his life. After finishing with the Coast Guard he worked as a salesman in Cleveland and rekindled his interest in golf, winning the US Amateur championship in 1954 and turning pro the same year.

The next decade was one of heroic achievement, and though Palmers last win in a major came in 1964, his influence on the game remained undiminished. He continued winning other big tournaments in the US until his last victory there in 1973, and his last win in Europe was in 1975. He also ran his own tournament on the US tour, the Bay Hill Classic, which, because of his reputation, attracted fields as good as could be found outside the majors. The programme for that event, held in Orlando, Florida, carried advertisements for products endorsed by Palmer, ranging from cans of oil to tractors, from Cadillacs to Rolexes, from private banks to batteries, and he was making even greater sums of money on the back nine of his career than he did on the front.

For all his fame, however, Palmer was a modest man. From time to time people tried to get him interested in politics, and it was seriously proposed, at the height of his popularity, that he run not just for governor of Florida but for the US presidency. He never for a moment considered such nonsense, for he was a man much happier in his den or his workshop than in any high office.

In his den he had a Rolling Rock beer dispenser, well used when friends called round, and in his workshop he had all the tools any old-time club professional ever possessed. He was never happier than when tinkering with clubs, re-gripping or re-whipping an old set, altering a club loft or adding some lead strip. Some who saw him in these surrounds suggested he would have been happier in his life being the club pro his father was before him. But that viewpoint ignored the fierce competitive instinct which, while it consumed him, always remained well-hidden.

There was no better example of that instinct when the draw brought him and Jack Nicklaus together for the final round of the 1980 Masters. At that point Palmer had not won a tournament for five years, and Nicklaus, his friend and great rival, was the reigning US PGA champion. It should have been no contest. But Palmers wife, Winnie, knew better. Arnie plays better when hes got something like this to light his fire, she said. Palmer, whose reaction on hearing the draw had been to roar Ill whip his ass, went out and shot a 69 to Nicklauss 73, finishing fifth. In his previous 18 attempts at Augusta he had failed to break 70. Palmer had a long love affair with Augusta, and when in January 1997 he learned that he had prostate cancer, his first reaction was to ask whether, if he had the surgery immediately, he would be fit to play at Augusta in April. The answer was yes, and he was.

Altogether Palmer won 73 tournaments worldwide, including more than 60 on the US tour. Only Snead, Tiger Woods, Nicklaus and Hogan are ahead of him in that department. Twenty-nine of his victories were in the period 1960-63, which led eventually to him being named Associated Press athlete of the decade for the 60s. He appeared in six Ryder Cups from 1961 to 1973, playing in 32 matches and winning 22, and was twice a Ryder Cup captain in a playing role in 1963 and a non-playing capacity in 1975, winning both times.

He entered his last US Open at Oakmont, in Pennsylvania, in 1994 40 years after first playing in the event and his enthusiasm and longevity is demonstrated by the fact that the gap between his US Amateur championship win in 1954 and his US Senior Open victory in 1981 was 27 years. Perhaps no professional ever loved the game more. Many of the top players cannot bear to play unless there is a competitive aspect, and a round with friends for pure enjoyment is unthinkable. But Palmer played for the joy of it, and in his communication of that fact lay the secret of his incredible popularity.

There was an occasion at Bay Hill when he and the then emerging Woods found each other on the practice range at the same time. Palmer asked Woods if he was enjoying life on the tour and Woods replied that he was, because, you see, the thing is that I love to play golf. Palmer smiled and replied: Well, thats good. I know something about that. Its a problem Ive had for about the last 60 years.