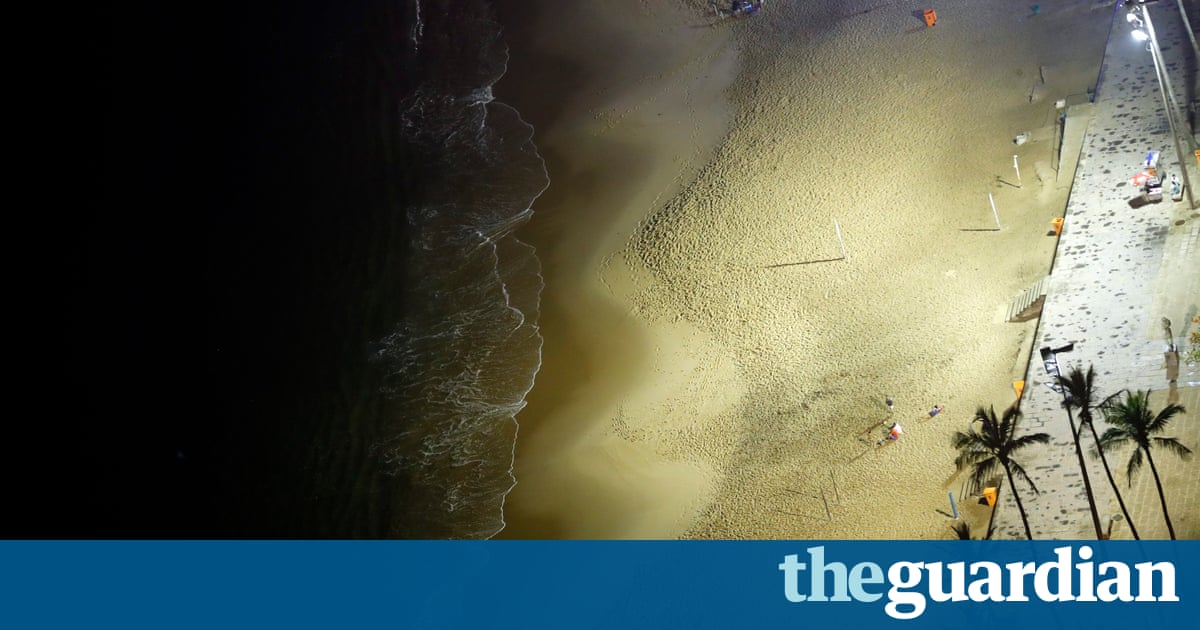 Scientists in Rio de Janeiro have warned that the citys sea defences may not be able to cope with the effects of climate change after a record storm surge swamped beaches, dumping hundreds of tonnes of sand across nearby roads and buildings.

Waves of almost four metres in the weekend storm left beach flags fluttering in tatters, forced the closure of deckchair-rental gazebos, and inundated coconut-and-beer kiosks with grit and sea water.

Tourists who had expected to bask in the glorious sunshine that is normal at the start of the southern hemisphere summer walked ponderously along a shoreline that is only slowly recovering from the unseasonal buffeting, while local traders lamented the collapse in business.

This is the worst I have seen in the 20 years since I started working here, said Dominique Souza as he surveyed the aftermath of the storm surge at Post 11 in Leblon: giant heaps of sand, cracked pavements and deluged public toilets. He estimated a more than 80% fall in sales over the past few days at his baraca (beach stall) that sells cold drinks and rents parasols.

Although he expects business to pick up as soon as the weather improves, climate scientists are debating whether wave-slamming on this scale poses an increasing threat to Rios beach economy, which is estimated to be worth 2bn reais (509m/$622m) a year and directly and indirectly employs more than 230,000 people.

In the 1990s, storm surge disruptions occurred roughly once a year, but since 2010 they have hit Rio four or five times as frequently. There have already been four this year, including two of the biggest ever seen. In April, two people were killed when a 50-metre stretch of the Tim Maia bike path was washed away just months after it was built.

This time what was left of the bike path was temporarily shut down along with the Delfim Moreira Avenue to prevent further fatalities and damage. One pedestrian area was also closed off due to subsidence risks, and a wooden deck area the Mirante do Leblon was damaged.

David Zee, oceanography professor at the State University of Rio de Janeiro, said the immediate cause of the swell was a cyclone off the coast of Uruguay combined with the high tide of a new moon. But he said the timing and scale of the extreme weather event posed longer-term climate concerns.

This storm surge is not normal at this time of the year. The surges usually happen in August or September at the latest and they are not so big. This indicates that, without a doubt, the climate is altering.

The increasing frequency of the storms is hindering Rios beaches ability to recuperate, leading to erosion along stretches of the shoreline at Copacabana, Arproador and Macumba, and accumulation elsewhere, such as Leblon.

Vitor Zanetti, of the Technological Institute of Aeronautics, called on the government and local businesses to respond to what he predicted would become a growing trend. This was an extreme climate event, he said. The one thing all climate scientists agree on is that we will see more storms and droughts.

With the latest wave dumping sand and water in buildings across the street from the beach, he suggested hotels relocate their lobbies to higher floors. We need to start thinking about adaptation, he said.

But there is no consensus on the causes.

Alfredo Silveira, an associate professor of synoptic meteorology at Rios Federal University, said the size of the surge was within the predictable patterns of wave behaviour rather than the result of climate change. There is no mystery in its definition or origin. It was predicted and well documented. But it was a bit outside of the usual time frame, a bit late.

Others meteorologists blamed El Nio, though its impact faded earlier this year. Hugo Abi Karam, a meteorologist from the Federal University of Rio de Janeiro, was more inclined to blame the surge on local factors, such as silt accumulation, poor drainage, seafront construction

But there is little doubt that Rio like much of south-east Brazil is suffering more storm surges, extreme rainfall and protracted droughts.

Given these long-term trends, Carlos Rittl, executive secretary of the Climate Observatory coalition of NGOs, said the recent wave damage was the latest sign that Brazil must fulfil its responsibilities to reduce carbon emissions, when it joins other countries in United Nations climate talks later this week.

This shows the high degree of vulnerability to climate change in Brazil, which has 7,400km of shoreline and 25% of its population living on the coast, he said. This extreme weather event must at least draw attention to the need for the country to be consistent on its climate policy and not invest in more fossil fuels thinking that it has already done a lot to curb emissions.